HAVING TROUBLE USING OUR SITE? WE STRIVE FOR ACCESSIBILITY, PLEASE CONTACT US WITH SITE IMPROVEMENTS. CLICK HERE FOR MORE INFORMATION.

Get the latest from Electric City Barn

Contact Us Support The Barn Go to Albany Barn

THIS PAGE IS CURRENTLY UNDER CONSTRUCTION. CHECK BACK SOON!

These spectacular works are part of a larger collection curated by and on loan from the Hamilton Hill Arts Center ?in an effort to promote the knowledge, preservation and development of African and African Diasporic art and culture. View this exhibit through the end of May 2019.

In 2017, a group of art lovers and Schenectady lovers (called Schenectady Creative Arts Network or SCAN) got together to create a community based art endeavor to help bring neighborhoods together and lay the groundwork for permanent, outdoor, public sculptures in our city. The ?Schenectady and Me? project brings professional artists to festivals, outdoor events, and pop ups to help participants create small, two-dimensional compositions depicting places and events from their neighborhoods. These artists will help participants of all ages overcome any fears of creating artwork. They will guide them in the use of materials and in the basic principles of art and design. Phase 2 of the project incorporates the designs into large sculptures around the city by printing them on tiles.

BLOOM WHERE YOU ARE PLANTED

Keisha Stovall is a graduate of Bayside Music & Arts High School in Queens, and went on to attend Baruch College. The title of this exhibit is a mantra for Keisha, as she seeks to make the best of all situations: bring beauty into this world and be grateful for all opportunities that arise. Mentored by Perly Laighton of the Laighton Art Gallery, she has been a portrait artist since 2000. Like all self-employed artists, Keisha is always looking for that next inspiration. She often finds it in children?s faces, whether her three sons or in the students she works with in the Schenectady City Schools, at CREATE Community Studios or the Electric City Barn. She has also worked with youth at the Schenectady Boys & Girls Club and at the Saratoga YMCA.?

Brittany Smith is an interdisciplinary artist based in Upstate NY / Boston MA. She received her BFA in Photography with a minor in history from Lesley Art + Design in 2017. Brittany has both exhibited her work and curated exhibitions in the greater Boston area. Her exhibition, Our Sweet Secret Language, was featured as Boston Hassle?s Best Exhibition of 2018. Brittany is a student member at Gallery 263 and she is currently working at Lesley Art + Design while organizing a new exhibition for 2019.

Photographer Richard Lovrich viewed MAKERS 365 as a social experiment as much as a work of art and its goal was a simple, if somewhat quixotic one. Photograph portraits of 365 creatives, whether residing in, or passing through, the Capital Region of New York, and post one each day on social media. The result was a that of online community building and discovery. That virtual, phase-one digital series, has become a phase-two, gallery show, crafted by creative partner Tony Iadicicco and the Albany Center Gallery. Makers celebrates creatives in all disciplines and invites us to meet them, face to face. Richard continues to capture images of creatives and is excited that MAKERS can play a small part in the opening of the Electric City Barn, a project he heartily endorses.

?Creativity is piercing the mundane to find the marvelous.? ? Bill Moyers 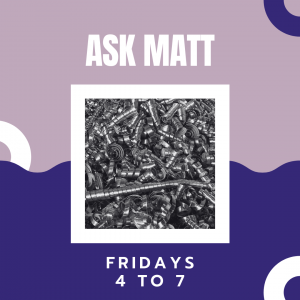 Visit our metal shop to ask Matt a question about your work, his work, and metalwork! Matt will not be offering this program on October 21, 2022.
4:30 pm BPM Lessons w/ Jae
BPM Lessons w/ Jae
Sep 30 @ 4:30 pm – 5:30 pm
Learn how to DJ, make beats, or record your own music with Jae.
View Calendar
Add
© Copyright Electric City Barn. All rights reserved.
Web Design by Elite Venture Media
Back To Top